Artificial Neural Networks has been increasingly popular during the last years. With API‚Äôs such as TensorFlow deep learning is easily accessible not only for machine learning experts. This leads to a lot of practice and hands on experience, but it might also lead to a lack of theoretical understanding about the approximation methods.

In this post I will try to shed some light upon how a neural network with the popular ReLU activation function actually makes its approximations.

The theorems and proofs in this blog post are taken from my bachelor‚Äôs thesis in mathematics/numerical analysis. When writing the thesis, my coauthor and I got inspiration from Chen 2016.

The neural network model that will be investigated has one single hidden layer, with an arbitrary number of nodes, the rectified linear unit as activation function for the hidden layer and the unit function (i.e. \(g(a) = a\)) as activation function for the final output layer. The network maps one input value to one output value. Hence, \(y: \mathbb{R} \rightarrow \mathbb{R}\). Thus the network can be expressed as:

Figure 1 is showing a visual representation of Equation 1 and 2, 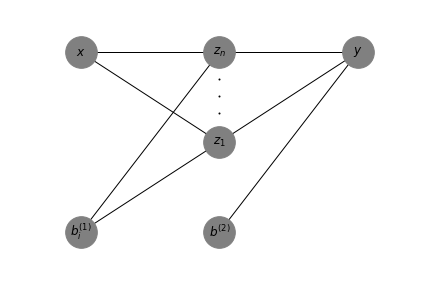 The ReLU function is defined as,

Already when looking at the ReLU function one can see that it looks like a linear spline. It has two ‚Äúline parts‚Äù and one discontinuity at 0. By looking at equation 2 one can see how \(z\) is just an affine transformation of the input with a wrapper, i.e. \(g()\). Since \(g()\) is defined as the the ReLU function the hinge will be where the affine transformation is equal to zero.

Solving for where the transformation is equal to zero,

In order to investigate this property a one hidden layer network with ReLU activation is set up in Keras with TensorFlow backend and tested on Runge‚Äôs function, i.e. \(\frac{1}{1+25x^2}\). The network approximation is compared to a linear spline with equidistant placed knots.

The network approximation plotted below has 3 inner nodes plus 2 endpoints, yielding 5 knots. 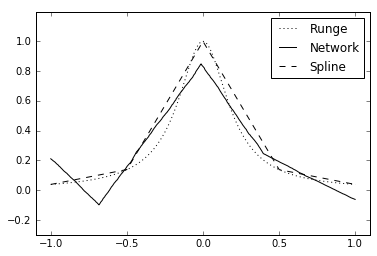 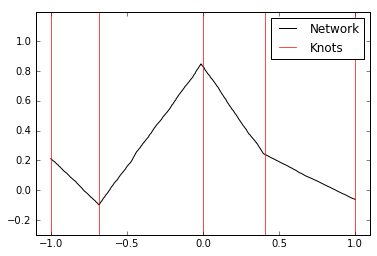 Let \(y\) be a neural network defined by Equation 1 and 2 with the ReLU activation function defined as in Equation 3. \(y\) is a function \(\mathbb{R} \rightarrow \mathbb{R}\) satisfying the conditions in the definition of the linear spline and is thus a linear spline. The knots are defined by the networks‚Äôs weights and biases.